Missions class, in the classroom on the main floor near the stairs to chapel.  Student 1 and Student 2 sat together, always near the window which was always open a crack.  In warm weather it was open for breeze.  In cold weather, the radiators on that side of the room put out so much heat that the window was open to allow a drift of cold air in.

One morning in early fall, waiting for class to start, the 2 students for some reason were discussing prayer.  Student 1 commented that he never closed his eyes during prayer.  He liked to see what everyone was doing when they were supposed to be praying.  Student 2 said that at least he must close his eyes when he was the one praying, but Student 1 said nope, he just prayed aloud, looking around.  Student 2 asked, didn’t he get distracted?  Student 1 confidently said he could keep his train of thought no matter what.

A couple months later… Student 1 was in fact called on to pray.  He stood and began his prayer.  Student 2, watching, saw that he was indeed looking all around the room, leaning forward and backwards for better views while he prayed.  Student 2 picked up Student 1’s very expensive pen and tossed it out the window.

An irate holler, “Hey, my pen!” was how Student 1’s prayer abruptly concluded, all eyes then on him as he mumbled amen and slumped down into his seat.

In the 70s, chapel seating was alphabetical, and so students sat next to the same people every morning.  Student 1 couldn’t help but notice that some of the students near her slept during chapel, some occasionally, some frequently.  This gave Student 1 the perfect opportunity for a prank (and actually, she repeated it with Student 3 Student 4,…)

“You’ve been called on to pray,” is what she said to more than 1 student, jabbing them awake. The awakened student would struggle to his feet, only to realize that the announcements were proceeding and in fact no one had asked him to do anything.  In one other instance, the speaker had asked everyone preparing for the ministry to stand. Student 2 was sleeping soundly through this, but Student 1 woke him, told him to stand, told him why.  Of course she knew that by the time he stood, everyone else would be seated, which is exactly what happened.  As she recalls it now, Student 2 did not see the humor, “but his fiancée who was sitting in front of us could hardly control her giggling.”

Student 1 and Student 2 sat next to each other in chapel, in the back row of the center section, right in the center of that row under the clock.  Chapel began at 8:00, and when the chapel bell rang students had to be in their seats or they received a tardy slip.  Student 2 typically arrived with everyone else, getting to her seated so people wouldn’t have to get out of her way to let her to the center of the row.

Student 1 also typically arrived with everyone else.  But he stood at the end of the row, grinning, waiting until everyone else was already in their seat, watching the clock.  When just a few seconds remained, he would make his way down the row, causing everyone already there to have to stand, or to allow him to clamber over them.

Mrs. Anderson, who took attendance, did her best to stop this stunt; she lectured Student 1, scowled at him, and shook her head. Each day she had her pen ready to write out the tardy slip, but each day he managed to get seated just as the bell rang.

Student 2 observed daily Student 1’s satisfied smile at the havoc he caused. She heard and agreed with Mrs. Anderson who lectured him as she stood behind their row. And she tried pointing out to him how annoyed everyone was.  All to no avail.

After a couple weeks of this, Student 1 had an opportunity to take action. 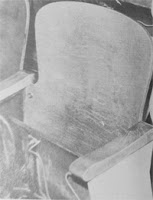 Student 2 was going to be on the platform for chapel. The night before she took twine to the chapel, and fastened Student 1’s seat in the up position.  The next morning, a few minutes before 8:00, Student 2 was on the platform with her group, having a perfect view of the back row, and Student 1 loitering in the aisle.  As the seconds ticked down, Student 1 finally began his trek down the row.  He reached his seat, as always, with a couple of seconds left.  He confidently pulled down on the seat – and it didn’t move.  The seconds were ticking away.  Student 2 could see that Mrs. Anderson noticed what was happening, and was advancing with her pen and tardy slips.  As the bell rang, Student 1 was still standing.  A couple seconds later he managed to break the twine and lower the seat, just in time to receive the tardy slip Mrs. Anderson handed him.

Looking up to the platform, Mrs. Anderson grinned at Student 2, and waved a victory salute.

Posted by VCAA Story Board at 8:23 PM