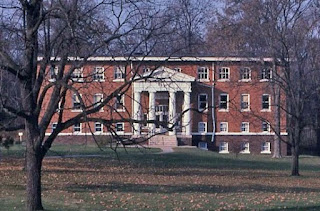 My family lived just off campus (Dad was President of Vennard for several years).  Thanksgiving of '77, Cindy and I were both there for the holiday, looking for something to do.  Things can get a little boring during Thanksgiving break when almost everyone has left campus.  Cindy had found a booklet of Turkey Carols, and caroling a few professors took up a couple hours. But we needed another project.


It just so happened that Professor Michael Toy had decided he didn't want Christmas decorations in his piano studio in the Music Building.  I don't remember how the conversation occurred, but a few of us in his classes thought this was rather Scroogish behavior.  Cindy and I decided to rectify the situation.

We very quickly abandoned that plan.  Back to my parents house to get a ladder.  I drove, and Cindy, leaning out the passenger seat window, held the ladder against the side of the car as we drove very, very, very slowly back to the Music Building.

Once we had the ladder up the side of the building we saw that it reached to a little above the window sill.  It was a bit of a balancing trick, forcing the window open enough for us to get through.  You remember those windows - big, and old and not easy to move.  But we got it done, got the evergreen branches up the ladder and hung above the chalk board.

It was a complete success.  Not only did Professor Toy leave the evergreen decorations up for the Christmas season,  they remained long after they lost their needles.

As to how the decoration got there, he did comment that he knew the doors were locked. And so someone would have had to come in through the window, but no one would be so idiotic.  He should have known better.