Here's One for Keyboard Students in the 70s

Professor Mary Bellus Barnes arranged in 1975 for an organ instructor to come from Central College to give classes at Vennard. He was already coming into town to teach a few students at Penn, but we only had 1 organ student.  It was a great favor that he would come over and teach on our campus as well. He also loaned us a harpsichord for our Coffee Cantata, and instructed his one organ student on that instrument as well.

But there was one issue that caused him great frustration.  His student was not tall enough to reach all the organ pedals easily.  In order to play Bach inventions, she was obliged to stand and balance on the pedals at the furthest ends and then to have to sit back down on the bench. She occasionally slipped off the pedal, losing her balance and nearly sliding off the bench altogether.

The instructor inquired of the music department about acquiring an additional, shorter, organ bench. But the budget just wouldn't allow it. That was where the student thought it would end. Then one day she arrived for her lesson to see that the instructor had set up a sawhorse and power saw in the chapel.  He was halfway through the process of sawing and inch and a half off the bottom of the organ bench. He actually wanted to remove an additional inch from the bench, which would have been perfect for his student.  But he knew that would be drastic enough to be noticed.

The student was more than willing to be sworn to secrecy, as she wasn't certain what the consequences would be.  And she kept that secret, even when listening to senior students and faculty organists puzzling over what was off about the pedal placement. 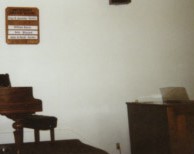 A lot of campus stories happened in the lower hallway of the Administration Building.
Dr. Harris told this story that happened to him in part, but more significantly
happened to a freshman in his first week of college.

This story happened at the beginning of the school year, in the busy lower hall of the Administration Building.  It was just a couple minutes before time for chapel to start.  Dr. Harris was about to leave the men's room, but the door was blocked.  He pushed at the door again, and then decided to wait.  He had heard the voices of Ray Adams and a freshman young man.  Knowing Ray, Dr. Harris was certain he knew what was happening.

He suspected Ray had told the boy they were holding the door to keep one of their friends from getting out.  He also suspected that Ray was going to make a getaway, leaving the freshman holding the door by himself.  Dr. Harris was right on both counts.

In a few seconds he heard the boy calling out as Ray ran off.  And then complete silence, as the young man started to wonder who exactly was on the other side of the door.

Very hesitantly, the door opened.  Dr. Harris described a look of terror on the freshman's face when he saw the President step out.  All Dr. Harris said was, "don't you think you need to get to chapel?"  The student raced away at full speed.

When he recounted this story, Dr. Harris did have to admit that it was a good joke on the freshman, and that in truth it was exactly the kind of stunt he would have pulled as a student.

Spotted by a Yearbook Photographer 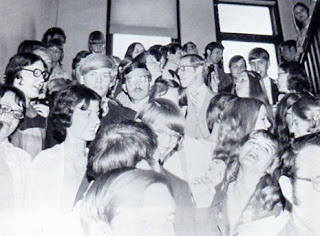 Tom Thurman shared this account of being summoned to President Harris's office;
Younger alums will spot a couple of their professors in this photo.

In the '70s, college enrollment was full. Chapel was the one time during the day when all students could be located. So the start of chapel was the time that notices, usually unpleasant, were delivered. A staff member would hand folded notes to the person seated at the end or the row, and the note would be passed down to the unlucky recipient.

Tom Thurman had received notes on occasion, so was not particularly worried when a note was passed to him - until he saw the message. He was to report to the president's office at his first opportunity. Tom recalls spending the entire chapel hour racking his brain trying to think what could have caused this.

During those years classes filled up quickly, and you could not always sign up for the classes you needed. Tom was particularly adept at getting the academic department to substitute one class requirement for another. So he thought one of his class substitutions might have gone a step too far. But he could not think why it would be so bad that he was bypassing the academic office and going straight to the president.

Not only did he have to worry about this all through chapel, but also through classes. Eventually, with great trepidation, he made his way to the president's office suite, and was ushered into President Harris's office. He took his chair and waited nervously while Dr. Harris concluded the business in front of him.

Finally Dr. Harris set aside his papers and sat back in his chair. He studied Tom for a moment, and then asked, "What do you think of the Yankees chances for winning it all this year?"

When Tom told this story he said he wasn't immediately relieved. While they talked baseball, he was waiting for the real reason he had been summoned.  But after a few minutes, Dr. Harris told him thanks, and he could go.

30 years later, Tom said it still makes his heart stop a little.  Dr. Harris had known Tom would worry all morning about being called in and would expect the worst.  Tom said he still couldn't quite believe it.  But we can.
Posted by VCAA Story Board at 5:55 PM